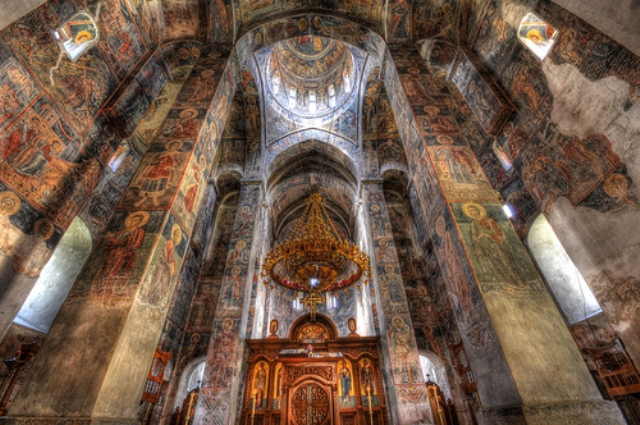 In the XVIII century Mitrovica was not an important artistic center considering the immediate proximity of Sremski Karlovci, seat of the Metropolitan, where the artists of that time gathered to work the needs of churches on the territory of the archbishopric. In the second half of the XVIII century, the old church of St. Stephen's obtained a richly carved baroque iconostasis, work of an anonymous master, with the paintings by Teodor Kracun, the most renowned artist of the baroque painting in Vojvodina.

In the beginning of the XIX century there was effected the decoration of the newly built churches, Catholic and Orthodox. The altar paintings in the Catholic church were made in 1812 by Arsa Teodorovic, the representative of the classicism in the art of Vojvodina. In the same year Marko Vujatovic completed the carvings on the iconostasis and the paintings on the iconostasis were finished three years later by Arsa Teodorovic.In the first half of the XIX century there worked at Mitrovica also some local masters, such as the self-taught painter Lazar Stajic Toskovic and his son Jovan who had begun to study painting, but died young as a student of the Art Academy in Vienna.

From both these artists there remained a few paintings of religious character. In addition to those artists who worked for churches, at Mitrovica are to be found in the course of the XIX century also the masters of the profane painting. From among the renowned artists who made portraits of the members of well-to-do families of Mitrovica, ought to be mentioned Nikola Aleksic, Pavle Simic and Novak Radonic. In addition to the artists from Vojvodina there are to be met with at Mitrovica axso the painter from Osijek Franja Gifinger and the famous artist from Zagreb Ferdo Quiquerez.

The text was taken from the monograph SREMSKA MITROVICA, published in 1969 by the Museum of Srem